My husband and I have very different hobbies that we enjoy. Let me rephrase that – we have polar opposite hobbies that we are each completely obsessed with. I am an unapologetic crochet addict and he is fanatical about Brazilian Jiu Jitsu. It’s not often that crocheting and Jiu Jitsu collide with each other, but when they do it’s in a very big way!

Last month I tried Corner to Corner crochet for the very first time and I was instantly in love with this stitch pattern. As I was making that first C2C blanket my mind was already planning out how I could make a graphgan for my husband. He had been working on his Jiu Jitsu rank promotion requirements for a few months and I wanted to surprise him with a blanket that has his school’s logo on it.

So as soon as I finished that first blanket I jumped on to Stitch Fiddle and designed his surprise Blue Belt Promotion Blanket. 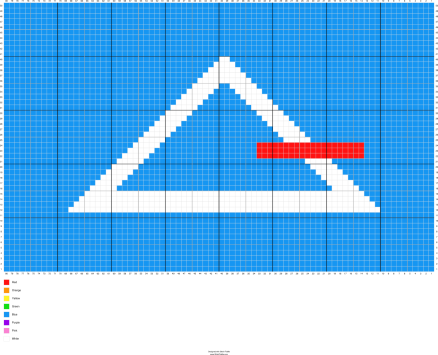 The key word here is “surprise” – I only worked on this blanket when he wasn’t home and hid it away in a box when I wasn’t working on it.

This was actually a huge pain in the butt because I didn’t make nice tidy bobbins when I started working on this. I didn’t think I needed to because there were only three colors. Working off of full skeins became a tangled nightmare to stuff into a box every day. Lesson learned here – make up some bobbins the next time I make a C2C graphgan!!

Like I said earlier – our individual interests are totally different but we both pretend we are interested in each other’s hobbies just enough to not upset each other. I can identify a few of the common Jiu Jitsu moves and he knows what a granny square is. Other than some very basic things we both just smile and nod when the other is going on and on about the new things we’ve respectively learned or done.

This is where the story gets funny. When I reached the point where I only needed the blue yarn and was well into my decrease rows I was very anxious to get the blanket done. He had already had his official promotion ceremony and I really really wanted to give him his surprise. It was the weekend and I thought – the hell with it I’m just going to work on it out in the open. So I sat myself in my comfy crochet recliner and worked on the blanket – while he was sitting about 4 feet away from me on the couch! We spent the entire afternoon/evening watching TV and he didn’t notice what I was working on. Same scenario the next day – I was openly working on his surprise and he didn’t notice!!!! When I finally fastened off the last stitch, folded it up and handed it to him he said “WOW when did you do that!!!”

So to make a short story long – it’s a good thing that he doesn’t get overly involved or curious about what I’m crocheting. I can use it to my advantage when I’m working on surprises for him!!

I would love to hear your comments! Cancel reply

Studies have shown that seeing the image of faces in random places is natural human behavior and not symbolic of anything related to the paranormal. It would be easy to just believe that and explain away any sightings as your mind playing tricks on you. But what if that wasn’t always true? What if we […]

Every Wednesday my son Bill comes over for dinner. I always make him a nice home cooked meal and send him home with some leftovers. I also make dessert every Wednesday too. It is the only night of the week that dessert is guaranteed.

Madeline – Self Portrait in Oil

Today I am sharing a painting by my daughter – “Madeline – a Self Portrait in Oil”.